Check out our new PreK video!

What does Pilgrim offer?

Pilgrim At A Glance

Acceptance into #1 High School of Choice

“All six and seven year olds need to see and experience that learning is fun! I strive to teach to the whole child—incorporating a ‘brain building’ classroom experience and strategies.”

“I like the fact that Pilgrim is a strong community that teaches more than academics: responsibility, care, and a good balance between academic and emotional development.”

“I love Pilgrim because our friends become our family.”

“My seventh and eighth grade teachers instilled in me proper discussion skills and deep analytical thinking skills that have carried me through my freshman year. The competition to get into high school is tough, but with Pilgrim, you will be tougher.”

We host in-person open houses on the first Thursday of every month and Virtual Coffee Sessions with our principal every Tuesday! These are great opportunities to learn more about Pilgrim and meet with Principal Comella. We know you are looking for the best education for your child and we want to make your school search as smooth as possible! Click on one of the buttons below to RSVP to these events!

Pilgrim Lutheran School’s Principal Chris Comella was named a 2018 National Distinguished Principal. Thank you to the National Association of Elementary School Principals for this honor!

Each year, the “Best of Chicago” Awards are given to local schools and businesses based both on the recommendations of people in the community and third-party data. The Chicago Award Program honors the achievements and accomplishments of organizations that make the Chicago area a great place to live, work, and play.

Once again, Pilgrim’s Pre-Kindergarten has been named “Best of Chicago” – having previously earned the distinction in 2018. With its play-based philosophy and “whole child” approach to learning, Pilgrim’s Early Childhood Education Program is designed to be exceptional.

“Our teachers and staff are determined to engage each early childhood and pre-Kindergarten student, and make them feel safe and valued as individuals,” says Pilgrim School Principal Chris Comella. “We deliberately keep our early childhood class sizes small and ensure that every student is supported in achieving his or her own developmentally-appropriate goals.”

Pilgrim focuses on all aspects of each student’s learning including the academic, spiritual, physical, emotional, and social growth of each child.

Pilgrim welcomes students of all faiths and backgrounds. This affirming approach allows students to develop their own spirituality.

Service learning is an important part of a Pilgrim education. Pilgrim empowers students to give their time and serve their wider community. 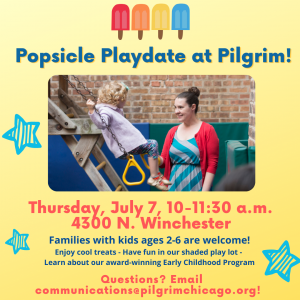 RSVP TO THE PLAYDATE!